Be the first to review this product
On request
SKU
8089
Escape from the wampa ice creature with Luke Skywalker!
Ask for availability 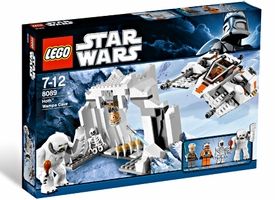 While on scouting duty on Hoth, Luke Skywalker is savagely attacked and captured by a ferocious wampa ice creature. Can he use the Force to recover his lightsaber before the wampa gets him Or will pilot Zev Zenesca save him using the snowspeeder Celebrate the 30th anniversary of The Empire Strikes Back with the instantly recognizable set. * Includes 3 minifigures: wampa ice creature, Luke Skywalker and Zev Zenesca * Features wampa cave and snowspeeder * Wampa cave features lightsaber catapult function and skeleton * Snowspeeder includes opening cockpit and realistic tow cable with string and hook * Combine with other Hoth sets from LEGO Star Wars including Echo Base 7749, Rebel Trooper Battle Pack 8083, and Snowtrooper Battle Pack 8084 * Wampa cave measures 7 (18cm) long and 4 (10cm) wide * Snowspeeder measures 7 (18cm) long