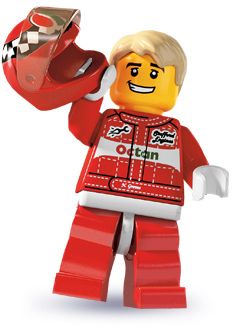 Years ago, the Race Car Driver met a mysterious man with a robot monkey who told him that he would be compelled to go faster and faster all his life. And it was true: from tricycle races to soapbox derbies, he has always been happiest when moving as fast as safety and the laws of physics will allow.

As soon as he was old enough to enter competitions, he was off and racing, constantly tweaking, modifying and tuning up his cars for more and more speed and power. Now that he’s become a professional driver, he can finally do what he’s always dreamed of doing: tour the world’s racetracks in one of the fastest things on wheels!