“Take me to your traffic light, foolish Earth cupcakes!” 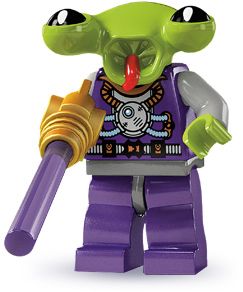 Nobody knows where the Space Alien came from or how it got here. It just showed up one day with a map of the planet and an Alien-to-Human dictionary, but neither one works very well. The map puts Washington D.C. in the middle of France, and the dictionary lists cows as a type of locomotive... which made things kind of complicated that time when the Space Alien tried to take a train to meet the President.

The Space Alien wants to conquer the planet, but it keeps getting sidetracked by interesting tourist attractions, so it hasn’t really gotten around to the whole taking-over-the-world thing yet. It’s also not sure what to do with the Earth once it’s been conquered, but it’s pretty sure that whatever it is, it’ll be totally awesome!