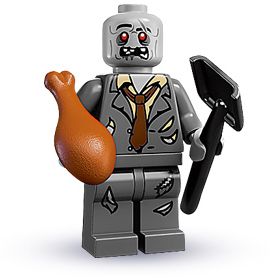 Slow in speed and even slower of mind, the lumbering Zombie may look a little scary, but he’s completely harmless in every way. Everything he does is slow, mindless and repetitive, from zoning out while watching TV, to waiting in line at the grocery store, to stacking one brick on top of another to build a perfectly even, completely featureless wall that stretches along for miles and miles.

If you interrupt him, he’ll just stare at you blankly before going back to whatever he was doing before. If you put an obstacle in front of him, he’ll keep bumping into it over and over again until someone turns him around. If you pick him up and move him to a new place, he’ll start doing something mindless there instead. The only thing that seems to motivate him is his cherished turkey leg – if you dangle it in front of him, he’ll stretch his arms out toward it and follow it wherever it goes.