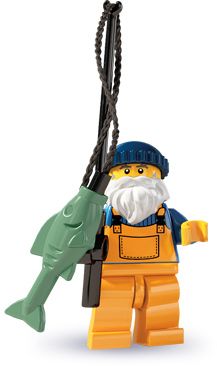 The Fisherman has sailed on every ocean, river, lake and stream in the world, and he has a story for each one. He can tell you all about the time he caught an entire school of flying fish with a butterfly net, was shipwrecked by a typhoon and escaped with the help of a friendly whale, or hooked a giant squid with nothing more than a fishing rod and an old rubber boot for bait.

Of course, no one believes these obvious tall tales, which makes the Fisherman a little cranky, because every single one of them is absolutely true. It’s not his fault that he had to throw his catch back because it wasn’t giant squid season yet, or that the batteries in his camera died that time he caught a sea serpent off the coast of Greenland. One day he’ll bring back proof, and then everyone will finally believe his stories!